Mr. Lynch studied Chiropody in Toronto, Canada and graduated in 1991. After working for the Ontario government and privately as a Chiropodist in Toronto, Brantford, St.Catharines and Niagara Falls.

Mr. Lynch moved to Innisfail in North Queensland in 1992 and soon after began practicing in all areas of the north including Tully, Innisfail, Atherton, Babinda, Cairns, Mareeba, Mossman and the Cairns Diabetes Centre.

Mr. Lynch is a sole practitioner supported by his practice manager, Jade McNulty. He has clinics in Tully every month, Atherton and  Innisfail every week and Cairns 3-4 days a week. Early morning and late afternoon and early evening appointments are available. 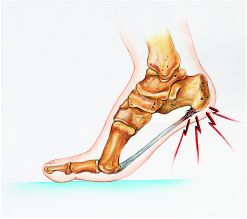 All aspects of Podiatry are available at InStep Podiatry, including:

From 1994 to 2016 Mr. Lynch was the consultant Podiatrist for the Cairns Base Hospital High Risk Foot Clinic, providing treatment and prevention methods to Diabetic patients from Thursday Island to Cardwell.

Latest News from our Blog